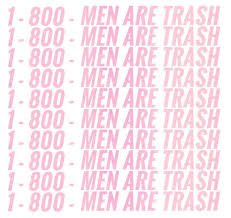 To be honest,we need you in our lives.

Without your sperm reproduction would be impossible, without your comfort this world would be lonely as hell. If all men were really trash, then those fathers celebrated on father’s Day wouldn’t deserve it, would they?

But wait a minute

Why would a woman somewhere in the world minding her own business accept and agree to such a slogan if there really wasn’t a problem.”Men are trash”,”Men are trash,” she sings along.

The 3 main reasons why men will continue to be trash are:

We’ve all heard the idiomatic expression,”boys will be boys.” Meaning,we judge those particular boys on instinct thus we will always expect them to act in a certain way. Of course there is room for change but is it really possible to change one’s nature? I don’t think so. Men will be men, women will be women. The decisions a male human makes will forever differ from one a female human will make. In short, women will never understand why men act in a certain way the same way men will never understand why women act in a certain way. The behaviours and characters men have continued to show is what these women have inturn seen and considered “trash.”

This is one of the major reasons why women started disliking men. Not one human being likes for their heart to be broken because it is one of the most painful experiences to a human being. At least 4 in every 6 students in my college dorm room have confessed to being either cheated on, dumped or deceived by a previous boyfriend. And mind you these girls are between the ages of 19 to 23. At such a young age, these women have already undergone heartbreak that leave most with the mindset of not wanting to mess with any other man ever again. There’s nothing you or I can do about this because it is also in our nature to abandon certain partners when they don’t seem fit to our liking.

I can put money on the fact that men are more sexually hungry than women. I have a male friend who amused me when he told me that he can cum more than five times in a day. Along with other other guys I have met who outrightly ask me “can we smash” and yet we might have just met. Sex is a gift from God to be enjoyed by his people but the men have taken it too far. To the extent that some of them get into relationships for sex and when they realise they are nolonger interested, they break your little heart and move onto the next. This right here is my third strong point on why men continue to be trash: this constant urge to always fix their Machine in something whether or not it leaves consequences.

In conclusion, I continue to stand with the men are trash revolution and declare that men will continue being trash for as long as the human race lives because life!

Do you think there are still some good men left? Blow up the comment section 💫💫

Probably curled up on whatever gadget you own with one of your legs ontop of the other. I see you👀

Tatyana Denise is here to inform you that she is finally here and she did not come to play.

Tighten your seatbelts comrades because this journey is going to be fun-filled,

Haha okay, we both know those last three are not real words *wink *wink.

Going back at it, I joined this platform so that I could have a chance to share my knowledge and research on relationships and sex in detail. I am not claiming to be an expert but you should know love and passion led me here.

“When I was a young warthog,” I noticed people always got excited when it came the latter subject was mentioned, i included.

So why not dive deep into this world and clear up many misunderstandings tearing society apart.

Today, you are invited to build this empire with me as we walk through the paths of subjects like Men are trash, understanding women and so much more exciting content.

What content do you want to hear about and why?

Thanks for joining me!